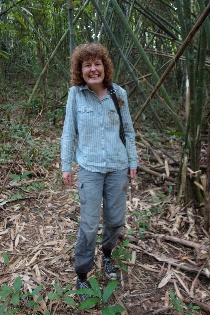 E.J. Milner-Gulland is the Tasso Leventis Professor of Biodiversity at the University of Oxford (Zoology Department). Before that, she was Professor of Conservation Science at Imperial College London for 15 years, having held previous positions in Resource Economics and Mathematical Ecology at Oxford, Imperial and Warwick Universities. Her first degree was in Pure and Applied Biology at Oxford, and her PhD at Imperial College was on the exploitation of elephants, rhinos and saiga antelopes for trade.

E.J. has a particular interest in developing and applying methods for understanding, predicting, and influencing human behaviour in the context of local resource use in developing countries. She also works on the illegal trade in wildlife and on designing, monitoring and evaluating conservation interventions in order to improve their effectiveness. E.J. received the Marsh Award for Conservation Science from ZSL in 2001, and the Marsh Award for Ecology from the British Ecological Society in 2011, in recognition of her achievements in conservation. In 2014 she was awarded a Pew Marine Fellowship to carry out research on the use of novel approaches to addressing marine bycatch.

EJ's research work is strongly interdisciplinary and has a wide range of research interests within conservation science. Her ethos is to ensure that all her research addresses issues identified by practitioners, and is carried out collaboratively with end-users. She also has strong interests in capacity building of conservation scientists in the developing world, and in developing conservation interventions which are both effective at conserving biodiversity and improve the lives of local people in the face of external pressures such as climate change, environmental destruction and social and political uncertainty.