With a quarter of the existing 350 species dangerously close to extinction, and a further 40 species just short of being threatened, parrots are the most endangered bird family on earth.

Over the last four centuries, 27 species of parrot have become extinct. Loss of habitat and the pet trade represent the two principal threats to the world's parrots. Over 80 per cent of threatened parrot species depend upon forests for their survival, and with an estimated 26 hectares of forest lost every day, it is clear that these birds face an uncertain future. To make matters worse, Indonesia, whose forests are home to 14 species of threatened parrots, has suffered a resurgence of forest fires this week, putting even more birds at risk. At least 58 species of parrot are at risk as a direct result of the pet trade. The market for parrots can be exceedingly lucrative, but it is also extremely wasteful - on average only one in five birds survives the trading process.

"Habitat destruction and a rapacious trade threatens the world's most magnificent birds with imminent extinction," said Dr Paul Toyne, WWF-UK's International Conservation Officer. "The Parrot Action Plan will play a vital role in helping forge action to save them from the brink. To be truly effective though, Governments must take firm action to increase protection for forest habitat, promote the independent certification of managed forests by the FSC, and enforce CITES, the Convention which regulates the trade in wild animals."

John Cleese, internationally famous for the Monty Python "Dead Parrot" sketch, is supporting the call for action to save the world's parrots. " A pet parrot can need as much attention as a human baby and it can need it for up to 50 years. So please, think carefully before you bring a pet parrot into your home."

There are 39 threatened parrot species found in the Asia-Pacific region, with the highest numbers occurring in Indonesia, Australia and New Zealand. The New Zealand Kakapo is now extinct in the wild and only 54 remain in semi-captivity. Conservationists are using hormone treatment to improve the Kakapo's fertility in a desperate attempt to save the species.

Forty-seven threatened parrot species occur in Latin America and the Caribbean region, with Brazil, Colombia, Mexico, Peru and Ecuador supporting the highest numbers of threatened species. The Spix's Macaw is the world's most endangered parrot in the wild, with a solitary male remaining in its natural habitat in Brazil. Its population has been decimated by the demand from collectors.

The hyacinth macaw, one of the world's largest and most striking parrots, has a population of around 3,000, and is listed as vulnerable to extinction due to illegal trade and destruction of its habitat. Shell and Enron have recently announced that they are about to start constructing a major gas pipeline through the heart of their last remaining forest habitat in Bolivia. The pipeline will destroy their forest home as well as open up the forest to wildlife traders.

The news for parrots is not all bad, however. At a ceremony to launch the Parrot Action Plan, the Carolina Medal for parrot conservation was awarded to Dr Carl Jones who has been instrumental in helping bring the Echo parakeet back from the brink of extinction. In 1987 there were only 8-11 birds left in the wild due to habitat destruction. Following a dedicated conservation programme, funded in part by the World Parrot Trust, there are now up to 109 birds in the wild. In the last year alone 22 captive-reared Echo parakeets were released.

"If we save the parrots we might yet save ourselves," said Mike Reynolds, Director of the World Parrot Trust. "We need the rainforests as much as the parrots do. The rainforests are the lungs of the planet. They are essential for human health. These forests also provide vital medicines with many more yet to be discovered".

Download a copy of Threatened parrots - a global picture, in pdf format

This file requires the Adobe Acrobat Reader, which is avaiable free of charge from the Adobe website. 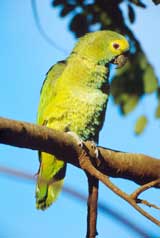