The EU and the Government of Spain have actively contributed to the catastrophic decline of the species by building an illegal road through one of the last remaining Iberian lynx habitats. Dam developments are also harming the lynx's habitat.

According to the most recent comprehensive survey there are only about 100 Iberian lynx remaining in the wild, and only 21-25 breeding females, in two isolated breeding populations in southern Spain.

Just two years ago, there were believed to have been at least 160 lynx. Five years ago there were 400.

Accidental deaths caused by speeding vehicles on the expanding road network are now the greatest cause of mortality for Iberian lynx.

WWF has been urging the Spanish authorities for over two years to close the Villamanrique-El Rocio road, which crosses the heart of Doñana Natural Park and fragments critical lynx habitat. The road was built with part funding from the EU, and several lynx have already been killed on it.

Callum Rankine, Senior Species Officer for WWF UK said: "Unless something drastic happens rapidly the Iberian lynx is a dead cat walking. With such a small population, the accidental loss of just one individual on a road brings the species closer to the brink of extinction.

"It is ridiculous that the European Commission is supporting projects aimed at protecting the Iberian lynx with one hand, while funding road and Dam schemes that are pushing it into extinction with the other."

Previous WWF research showed that 53 heavy public works in Spain affect the endangered cat. Dams are a particular threat, as they flood valley bottoms which tend to contain the best Iberian lynx habitat.

WWF also feels that all Lynx habitat should be covered by the EU's Natura 2000 Programme, which offers the strongest level of protection in Europe. Currently the areas proposed by Spain for Natura 2000 designation don't cover the biological corridor that would connect the remaining breeding population in Doñana National Park with the one in Sierra Morena - an area that is of utmost importance.

"These two populations are the last hope for the survival of the species. All key areas for the Iberian lynx must be included in the Natura 2000 proposal for the Mediterranean region and the Villamanrique-El Rocio road must be closed," added Rankine.

"The EU cannot pay lip service to environmental goals, and then proceed to undermine them. It must take species conservation seriously."

Other major threats to the Iberian lynx's survival include plummeting numbers of wild rabbits (the lynx's principal prey), and illegal hunting. 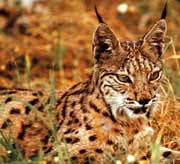 The last cat species to go extinct was the sabre-toothed tiger, some 10,000 years ago. It lived during the Pleistocene Epoch (the early part of the Quaternary Period). A fierce predator, it was about 1.2-1.5 m long, 0.9 m tall, and weighed about 200 kilos.

The Iberian lynx is less than a 10th the size of the sabre-toothed tiger. They can weigh up to 13 kg for males, and reach up to 88 cm (female) or 1 m (male) at adult stage. They are magnificently agile creatures whose main prey species is rabbits. For more information visit our Iberian lynx factsheet.