The 50-minute-long wildlife documentary, which was inspired by the research and conservation work of Dr Philip (Flip) Stander, captures episodes from the lives of the world's only desert-dwelling lions.

The film-makers spent almost nine months in Namibia, mostly working in Puros conservancy - a cooperative organisation that protects an area of land. The film explores the views of the farmers who share the same territory as the lions and the changing attitudes of people living with wildlife. An area of work IRDNC focuses on - strategies for limiting conflicts between humans and wildlife - is also examined in the programme.

Dr Stander said: "The lions are uniquely adapted to living in the desert and they are valuable to the growing tourism industry in the region. But people inhabit most of the 50,000 square kilometres that the lions occupy. Lions occasionally kill livestock and it is essential that the local communities receive benefits from tourism that outweigh the costs of living with the lions." 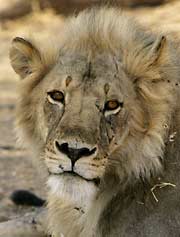